In this document we will present some of the Design Patterns used in Codeless Platform.

"Model View Controller (usually known as M-V-C) is a software design pattern commonly used for developing user interfaces that divide the related program logic into three interconnected elements. This is done to separate internal representations of information from the ways information is presented to and accepted from the user.”

Any representation of information such as a chart, diagram or table. Multiple views of the same information are possible, such as a bar chart for management and a tabular view for accountants.

Accepts input and converts it to commands for the model or view.

The main benefit of using this pattern is that you can change the implementation of any interconnected elements with some other version without changing the other two elements.

For example in Codeless Platform there are multiple different views of the same data like Detail view, Grid view, Card view etc. M-V-C pattern allows us that the same Model and Controller code works with different types of View.

In Codeless Platform M-V-C is implemented the following way:

The central element in Codeless Platform is Controller, not the Model.

To understand how this work we will demonstrate it in the following simple example process:

Grid view and Detail view implement the same IView interface.  One of the methods of this interface is render(). If we change the View instance, we don’t need to change other elements: Controller and Model.

Controller calls the interface method IView.render() and the View is rendering data as implemented in the concrete view class. The Controller does not know how View renders provided data.

Finally the same is also for Controller. When the Model fetches the data and the data arrives it instructs the Controller that data is available. Model is calling the IController method onDataArrived(). Model does not know what the Controller will do with this data.

The abstract factory pattern provides a way to encapsulate a group of individual factories that have a common theme without specifying their concrete classes.

This pattern separates the details of the implementation of a set of objects from their general usage and relies on object composition, as object creation is implemented in methods exposed in the factory interface.

The main benefit of using this pattern is that we can create UI technology independent applications.

When we start Codeless Platform with Vaadin as an implementation UI library, concrete factory: VaadinFactory will be assigned to UIFactory during application initialization.

When an application needs to show the button on the screen, it calls the UIFactory (in this case VaadinFactory) method createButton() and the factory will return a VaadinButton instance. Instead of calling Vaadin buttons native method to set height or width we call our own defined interface IButton method setWidth(String width) or setHeight(String height).

If we start Codeless Platform with JavaFX as an implementation UI library everything will be the same in application code and we will work with the JavaFX button instead of Vaadin button. The only thing that needs to be done is to assign concrete factory JavaFXFactory to UIFactory during application start.

The bridge pattern is a design pattern used in software engineering that is used to decouple an abstraction from its implementation so that the two can vary independently.

The bridge uses encapsulation, aggregation, and can use inheritance to separate responsibilities into different classes.

The bridge pattern can also be thought of as two layers of abstraction.

The main benefit of using this pattern is that we can create our own hierarchy of UI components and still benefit from UI libraries provided by some external provider. Bridge pattern allows us to build our own abstraction of component’s hierarchy that is independent of external UI libraries.

Let’s explain how this is used on concrete problems we needed to solve.

As previously explained in the Abstract Factory pattern, we have the possibility to create UI independent applications. One of the concrete factories is VaadinUIFactory that provides concrete Vaadin products (components) like Button, TextField etc. Vaadin has it’s own hierarchy of these components, let’s illustrate how this looks like:

In order to use Vaadin Button we can use inheritance and extend Button class and implement our own interface IButton that Abstract Factory will use to create a concrete button for us. The problem with inheritance is that if we want to have a method String getWidth() instead of float getWidth() this will not be possible because in Java we cannot declare two methods with the same signature and different return type.

In order to do that we can encapsulate the concrete button in our own version of Button (VaadinButton) instead of extending it.

Let’s see how our own hierarchy of components looks like that is independent of the Vaadin hierarchy: 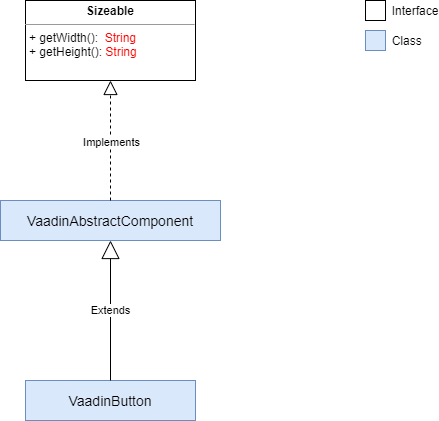 Here is a simplified version of our VaadinButton:

abstractComponent in this case Button is wrapped inside our own version of the button and we can call it’s a method inside. For outside users they see String getWidth() instead of float getWidth().

As we are wrapping external libraries we are free to build our own hierarchy of components.

Combination of AbstractFactory and Bridge pattern in Codeless Platforms

As we discussed earlier AbstractFactory allow us to get a concrete button by calling:

This should be done somewhere in the application where we need to use a button.

If we wrap this call in another class and call it inside it, the user of the class does not have to know that we are using the factory method for getting concrete implementation. This new level of abstraction is actually what an end-user will use:

User can simply do the following, without knowing or caring how the concrete implementation is provided:

A proxy, in its most general form, is a class functioning as an interface to something else. The proxy could interface to anything: a network connection, a large object in memory, a file, or some other resource that is expensive or impossible to duplicate. In short, a proxy is a wrapper or agent object that is being called by the client to access the real serving object behind the scenes.

For servers-side web solutions like Vaadin we can do whatever we want as “client” is actually a server code.

For client-side web solutions like Google’s J2CL, GWT or similar that transpile Java code to Java Script we need to make an HTTP request across the network to access server-side data.

For JavaFX, which is a framework for building desktop applications in Java, we would need to solve client-server communication as well as desktop and server are also clearly separated.

We can use a Proxy pattern to hide concrete service calls.

On the client-side we should use a Proxy that will delegate our call to the concrete remote call. This remote call can vary depending on the technology used. As the nature of standard web applications concerning server-client communication is asynchronous in nature, we should make our proxy methods asynchronous. In Vaadin runtime we do not have to do that as we are already on the server but if we want to stay server-side independent, we should do this via Proxy.

Let’s see how the proxy is used by the end-user on an example:

First, we will define the sync and async version of the interface for accessing our business logic class:

Then a business class that implements sync interface and a Service inner class that will provide singleton instance of this class:

Now we will create a Vaadin version of the Proxy. This Proxy will just create an instance of business class, call the method and return result asynchronous way:

For Vaadin this is enough, the only thing we did is we created a Proxy class that will call the service for us in an asynchronous manner. That is all we need to define, the rest of the text explains how to add the same for some other UI library/framework. We will use GWT as an example of runtime that was supported in the past.

The second is GWT-RPC example implementation. In order to use GWT-RPC we can use previously defined interfaces with some additions and for the service implementation we have to extend GWT RemoteServiceServlet. We will use our business class defined earlier to do actual translation.

On the client side we have to define the synchronous and asynchronous versions of the interface the way GWT-RPC demands it. Note annotation of the class, RemoteService and the way service is instantiated in an inner class. This is all GWT- specific. The rest of the methods are inherited from IMessageService:

And the asynchronous version, where GWT specific AsyncCallback has to be used:

Now we can create a GWT version of the Proxy. Note how two different callbacks are used, one is part of Codeless Platform API that the end-user sees AsyncCallbackAdapter and one that GWT demands to be used AsyncCallback.

That is it, now we only need to ensure that the appropriate Proxy is loaded on startup and the way end-user will access the concrete Proxy:

We will place our Proxy inside the class Platform. Service for easier access:

Instantiate it during application startup for Vaadin:

And in case we are starting an application with GWT runtime:

An end-user of API can use the service like the following for any concrete runtime:

This is a visual tool for creating fully functional web forms without any coding.

Explore all the available options to get started with  CodeLess Platform